More Than A Simple Buddhist Monk 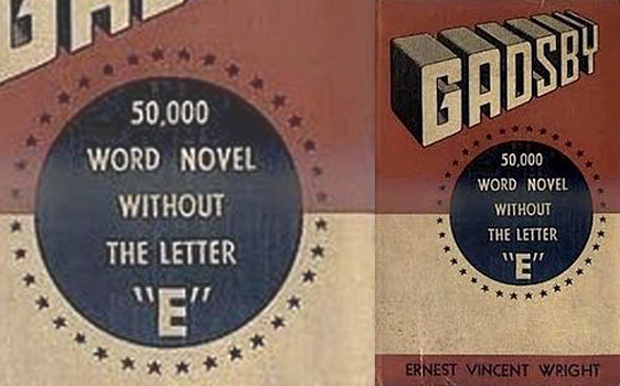 “E” is the most commonly used letter in English and a number of languages that use the Latin alphabet. Yet author Ernest Vincent Wright was able to pen a whole novel in 1939 without using this letter at all.

The novel Gadsby contains a total of 50,110 words. It is a lipogram, which means constrained writing that avoids using a letter or group of letters. It would have been trivial to write without letters like “Z” or “X”, but Wright’s task was by no means simple. He reportedly tied down the “e” on his typewriter before setting off to work on the final manuscript.

Wright admitted that the most difficult part for him was to avoid past-tense verbs with the “-ed” suffix. For instance, he would write “did walk” instead of “walked.” And he couldn’t use certain quantities in descriptions, including any number between six and 30, 70 and 99.

In describing a vivid wedding scene, Wright managed to skip the words “bride” or “ceremony” and even “wedding” – he called it “a grand church ritual” instead. He also took the liberty to reinvent famous sayings into lipogrammatic form. “Music has charms to soothe a savage beast” by William Congreve in The Mourning Bride is reiterated as “Music can calm a wild bosom.” And Keats’ “a thing of beauty is a joy forever” became “a charming thing is a joy always.”

Despite the novel’s brilliance, Wright struggled to find a publisher and had to pay Wetzel Publishing Co. to publish it. He also joined the ranks of authors with posthumous fame when he passed away, the same year the book was released.

Gadsby is now a favorite of constrained writing fans and a sought-after artifact among book collectors. Here’s a small excerpt from the book to satisfy your curiosity.

A Taste of China’s Exotic Cuisine