Let Concept Cars Give You A Lift Into The Future 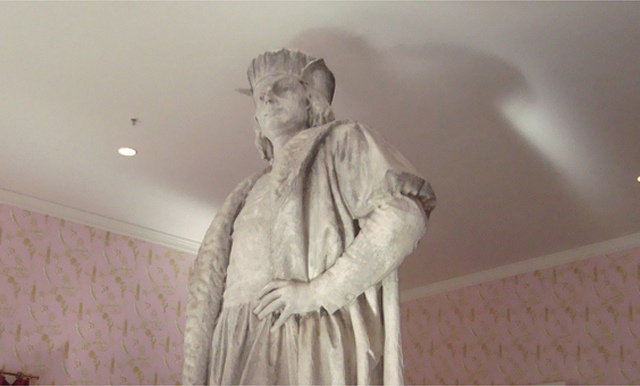 Discover the Discoverer of America

Amerigo Vespucci was the first conquistador to arrive in America, but Christopher Columbus is the one we all remember. Some people love him, some people hate him. When I picture him, I always imagine him strong, tough and powerful. Last week I finally had the chance to be face to face with him.

I usually contemplate his statue at the center of Columbus Circle in midtown Manhattan. But this time I was right next to him, overlooking the roundabout. (This is also the point from which all the official distances leading from New York City are measured – go figure…)

Take a 1892 statue on top of a 75-feet column and surround it with an apartment. The amazing result is the Discovering Columbus exhibit.

This art installation is a mix of cultures. An Italian icon in an American surrounding he is credited for discovering seen through the vision of a Japanese artist. That’s the beauty of our Modern World.

Tatzu Nishi, an expert in transforming our experience of monuments, created a comfortable and peaceful environment around this impressive statue. He literally built a living room where the statue would find its home for several months.

Nishi designed the perfect contemporary American living room – a library with all the American standards: a flat-screen TV, comfortable couches, newspapers and a funky wallpaper depicting American clichés, from Elvis to Mickey Mouse,  hot dogs to McDonald’s. It represents this Japanese artist and innovator’s vision of today’s USA.

What surprised me was not the realization that I was so close to that immense statue that usually looks down on me –  which, by the way, looks totally natural in this environment – but the fact that I was in a place that one can’t usually access.  Just as Columbus found himself in a place that so few of his contemporaries would see 530 years ago, I was doing the same.

Approximately 50,000 people will have the chance to salute the father of America at Columbus Circle until November 18. Rush online to get your free passes, and you might have the chance to see this most permanent of temporary exhibitions from a different angle than you imagined, just like Columbus.

Are You Celebrating Movember?