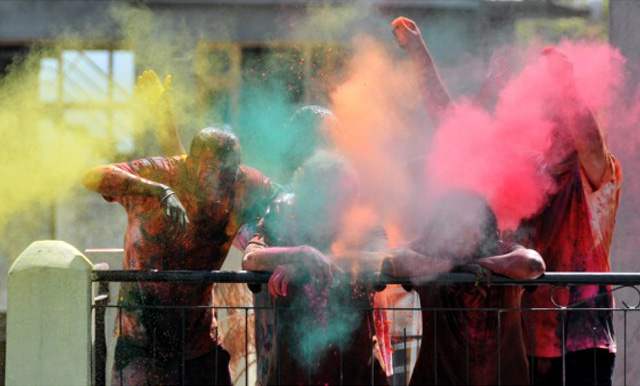 Holi and the Meaning of Colors

It is a flirt. A tickle. A life. The colors of Holi have a rhythm, a song and a story. Historically colors in different forms (Gulal/powdered dry colors, pichkari/water colors, etc.) were splashed to celebrate the arrival of spring, fertility and prosperity. In the modern day, the colors remain the same, probably a few shades brighter, but Holi has assumed a different role.

It is an expression of togetherness, a stress-buster of a kind that takes the color as a route to share a laugh and gives young boys and girls an excuse to flirt.

Holi has many origins but one popular story dates back several centuries to when the King of Demons ordered his son, Prahlad, to stop praying to the Good Lord Vishnu. However, in spite of several warnings, Prahlad remained unaffected. He was poisoned by his father, but the poison turned to nectar in his mouth. He was ordered to be trampled by elephants yet remained unharmed. In one such attempt, he was to sit on a pyre in the lap of Holika (a lady who had a boon from demons to survive in any circumstance). And even in this last attempt, Holika died but Prahlad survived.

This marked Holi, the festival of colors.

Holi is celebrated like a large party with colors and the happy hours begin early in the afternoon when the visual drama is even further accentuated with a sip of bhang (an intoxicating drink made with milk and cannabis), which is all but required to be imbibed in the madness of colors.

Holi is exactly what all of us wish we could be, a free splash of color!

For the Love of Africa