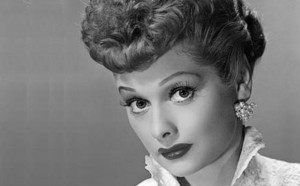 That whacky redhead. Who would’ve thought, watching her endearingly ditzy persona, that she would be the powerhouse responsible for shaping television as we know it today?

From filming in front of live audiences to syndicating their programs, she and Desi completely changed the medium. Their studio, Desilu, produced such classics as I Love Lucy, Star Trek: The Original Series, Mission: Impossible, The Untouchables and scores of other shows. Lucy bought out Desi at the time of their divorce to become the first woman in television to head a production company. Queen of Comedy meet Queen of Television.

Play the Tourist in Your Neighborhood