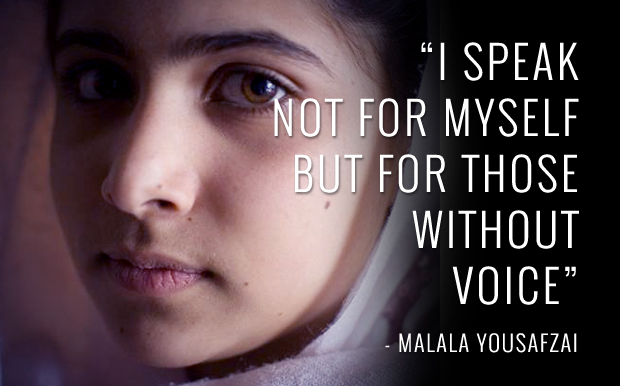 “I was afraid going to school because the Taliban had issued an edict banning all girls from attending schools.” – from Malala Yousafzai’s first blog post on BBC Urdu, January 3, 2009

Malala Yousafzai is a young Pakistani activist committed to the right of all girls to get an education. So much so that, last year at the age of 15, members of the Taliban boarded a bus she was riding with friends and shot her in the head and neck.

This assassination attempt failed. Malala was hospitalized in Pakistan and then, when her condition improved sufficiently, transferred to a hospital in the United Kingdom. The world watched as she progressed through treatment and rehabilitation to the point that she walked out of that hospital under her own power.

On July 12, 2013, her 16th birthday, she spoke at the U.N. Youth Assembly a gathering of more than 500 young leaders being held “to accelerate the goal of getting all children, especially girls, in school and learning by 2015,” according to a U.N. statement. Her statements were picked up across the globe. Here are a few of what we considered to be the most powerful:

“Here I stand, one girl among many. I speak not for myself but for those without voice… those who have fought for their right… to live in peace, to be treated with dignity, to be educated…. The extremists are afraid of books and pens… We want schools and education. No one can stop us. We will speak up for our rights. We believe in the power and strength of our words… our words can change the whole world.”