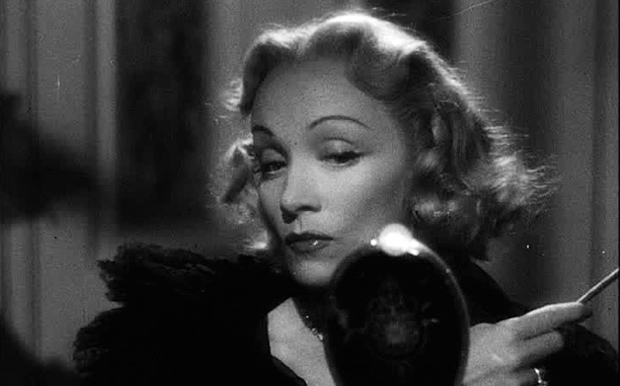 Marlene Dietrich was born Marie Magdalene Dietrich in Berlin on December 27, 1901. Although she trained to become a concert violinist, an injury to her wrist led her to abandon that for dramatics. This was the beginning of a lifelong habit of continual reinvention that enabled her to enjoy tremendous popularity throughout a long career.

After appearing on stage and in some silent films, she was discovered by Josef von Sternberg who cast her as Lola-Lola in The Blue Angel. To many she will always be that seductive cabaret singer who ultimately destroyed the infatuated elderly professor. In that role, she was the first woman to wear a man’s tuxedo on screen.

The day after The Blue Angel premiered in Berlin in 1930, Marlene left Germany to begin her film career in America where she became a citizen in 1937.

She was strongly anti-Nazi and during WWII, she entertained American troops in Europe and North Africa. Her strength of character was borne out during this time when she insisted on enduring the same conditions as the soldiers, sleeping on the ground and waiting in the chow lines with the troops.

During the 1960’s and 1970’s, as a cabaret star herself, she always performed part of her act in a man’s tuxedo, which became her signature look. Her androgynous-chic look was not a mere persona. As she once explained, “I dress for myself. Not for the image, not for the public, not for the fashion.”

It’s no wonder she continues to enjoy the admiration of so many. As Tatiana Sorokko said recently, “She was an incredibly strong woman and individual and that’s why I relate to her.”

‘Tis the Season for Gorgeous Windows