Play with your food. 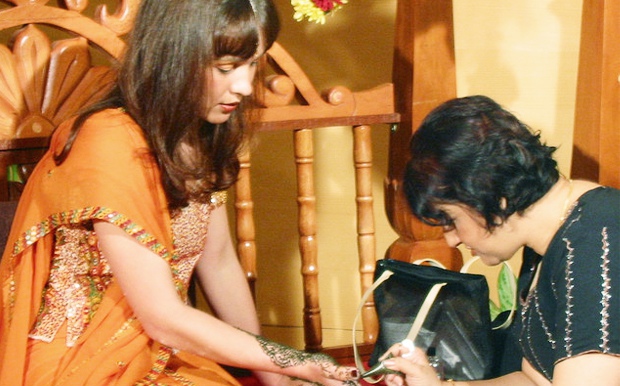 Mehndi: The Indian Bride’s Version of a Bridal Shower

No wedding in India is complete without the all-important “Mehndi” ceremony. The bride’s hands and feet are tattooed with beautiful floral designs. The ceremony is marked with a lot of singing and dancing.

Mehndi is a temporary tattoo. The Mehndi plant leaves are found growing in parts of the Middle-East, Africa and the Indian subcontinent. The leaves are dried and powdered into a paste and it is this paste which is applied onto the body in different elaborate designs and patterns. When the paste dries, it is scrapped off to reveal a dark, reddish-black hue of the design.

For over five thousand years, the art of body-painting with Mehndi or Henna has been practiced by women not just in the Indian subcontinent but in the Middle-East and Africa as well. Culturally, it still continues to remain symbolic of inviting good fortune and for making a fresh start. It is a symbol of fertility and abundance.

The ceremony of getting the mehndi tattoo itself is an occasion of celebration. Apart from weddings, it is applied a day before different festivals ranging from Diwali to Eid.

The Mehndi or Henna is said to have antiseptic properties which have a cooling effect on the skin. Applying mehndi or getting a mehndi tattoo is not just an art or ritual of body beautification but also an important sacred practice to invite grace and good fortune into the family. It is widely viewed as a talisman or blessing on the skin.

Although the color of the Mehndi wears off after a few days, it still remains one of the most popular forms of tattooing prevalent in the Indian subcontinent and is deeply rooted in the culture of the region.

This video is a popular Bollywood version of the Mehndi ceremony: