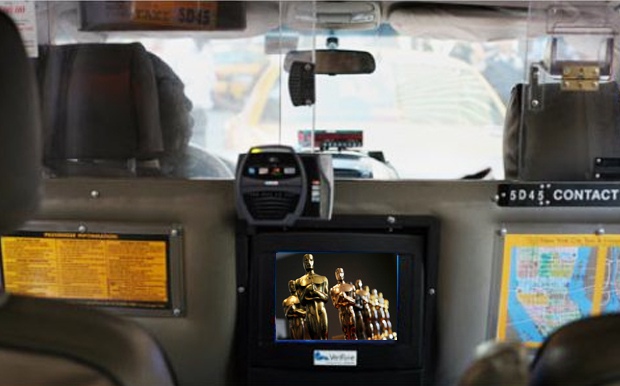 New Yorkers Can Now Vote for the Oscar

For the first time ever, New Yorkers who hail a Yellow cab can vote for an Oscar contender in advance of the 85th Academy Awards ceremony which will be held at the Dolby Theatre in Los Angeles on Sunday, February 24.

This is a brand new, first-of-its-kind survey that is taking place on TV screens located in the back of every Yellow cab. According to David Yassky, Taxi and Limousine Commissioner, the survey is a way to engage passengers. “New Yorkers love to talk about movies, so I figured they’d like this,” he says. It seems he’s right. Within days, the survey had 21,000 participants who voted in four categories. Here are the results as of January 25th. The survey/voting goes on until February 23rd.

Best Director
this highly controversial category includes five names: Michael Haneke, Benh Zeitlin, Ang Lee, Steven Spielberg and David Russell.
Result: Cab riders think Steven Spielberg will win for Lincoln, followed by Ang Lee for Life of Pi. This category has caused a great deal of comment because neither Ben Affleck for Argo or Kathryn Bigelow for Zero Dark Thirty received nominations – apparently for political reasons. How in the world could one’s work rate a Best Picture and not a Best Director?

On a final note, Yassky says, “This survey is also a chance to show off our city’s impeccable taste in films. No disrespect to Los Angeles, but I’ll take the judgment of New York City taxi passengers over Academy members any day.”

That said we all know the active membership of the Academy Awards has the final vote. Can’t wait to see who wins on February 24th! See the full results on NYC.gov website.

Perfume That Is Not Only For Sniffing