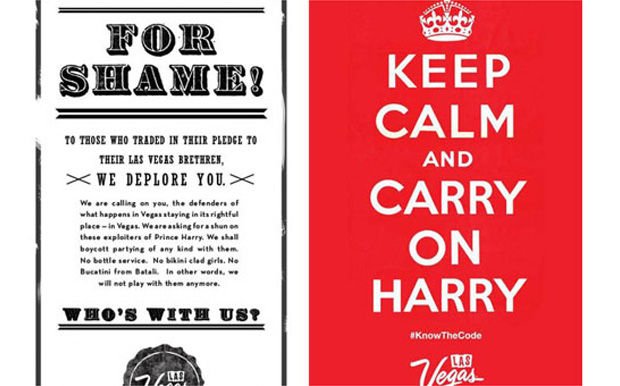 Not that Prince Harry, third person in line to the British throne, wasn’t getting enough attention from the press. Now naked pictures of him at a Vegas party gone wild have caused quite a stir with the public.

Prince Harry was engaged in a round of strip billiards after he and his friends had invited a group of girls back to their luxurious suite at the Wynn Hotel. It is speculated that one of the female guests took compromising pictures of him and leaked them to the press. He was shown shielding a nude blonde woman, the same woman he was being friendly with that night.

Cressida Bonas – the 23-year-old model and heiress Harry had been dating for the past few months – was obviously not happy with what happened. An insider said Cressida was “humiliated” and decided to break off the relationship. Luckily for Prince Harry, others seem to sympathize and have shown their support.

Vegas Tourism immediately released an ad that “deplores” people who break the code of “What happens in Vegas stays in Vegas.” It was followed by a Twitter campaign called #KnowTheCode. In the UK, 3,600 complaints were filed against The Sun newspaper, which ran the naked pictures of Harry. This Facebook group invited people, initially those who serve in the military, to post patriotic “naked salute” pictures of themselves to support the prince.