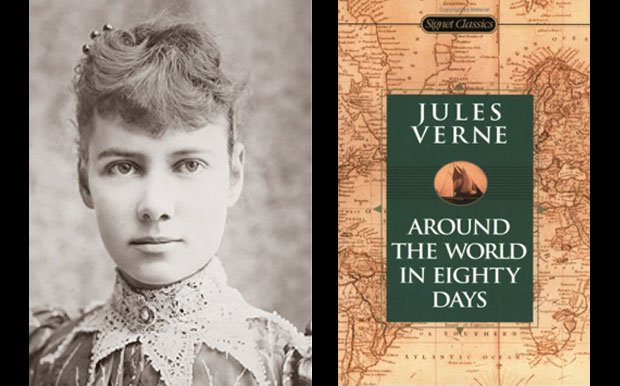 How far would you go to kick start your career? Would you feign insanity to get yourself admitted to a notorious asylum so you could document its horrors?

Nellie Bly did to get hired as a reporter at the New York World in 1887. Her 10-day stint exposed her to rats, rancid food, ice cold baths and abusive staff. It also earned her the job, lasting fame and the satisfaction of knowing her investigative reporting led to significantly increased funding for the Department of Public Charities and Corrections.

She was born Elizabeth Jane Cochran, but in those days all women reporters (not that there were a lot of them) wrote under pen names. The editor at the Pittsburgh Dispatch, her first newspaper job, named her after the popular Stephen Foster song, Nelly Bly.

Although they tried to relegate her to the women’s page, Nellie managed to write a series of investigative articles on female factory workers. She also traveled to Mexico on her own initiative to serve as the paper’s foreign correspondent and only returned when she was threatened with arrest for writing critically about the Mexican government.

In 1887, disillusioned with the lightweight nature of the assignments her editor continued to send her way, Nellie left Pittsburgh and moved to New York. For four months, she knocked on doors of various New York publications, trying to break into that nearly exclusively male world. Finally, at Joseph Pulitzer’s New York World, she got her chance.

After her release from the asylum, Nellie pitched a story idea to her editor. Jules Verne’s Around the World in 80 Days, published in 1873, continued to be widely read. Nellie proposed to make that journey solo and beat the protagonist Phileas Fogg’s time. Finally, a year later with the paper losing readership and money, he took her up on the proposal.

She departed two days later on the Augusta Victoria. Concerned with traveling at the utmost speed, she chose to carry only a small travel bag packed with toiletries and several changes of underwear. A woman traveling on her own was noteworthy in and of itself, but to do so without steamer trunks packed with numerous gowns was positively unheard of.

In the immediate aftermath of her departure, a rival publication, Cosmopolitan (which eventually became the Cosmo magazine we all know), sent its own reporter, Elizabeth Bisland on a similar trek from west to east. The competition spurred headlines and newspaper sales all over the world. The New York World further capitalized on their investment by holding a contest asking its readers to guess to the second how long Nellie’s trip would take. The winner would receive an all-expenses-paid trip to Europe. To insure a boost in circulation, you could only enter by using the forms published in each day’s copy of the World.

Nellie traveled by steamship, train and burro and completed her journey in 72 days, 6 hours, 11 minutes and 14 seconds, beating both Verne’s estimate and Elizabeth Bisland. She was only 25.

Five years later, Nellie married well and lived comfortably with her husband, millionaire manufacturer Robert Seaman. When he died ten years later, she continued to run his company until forced into bankruptcy by embezzling employees. No matter. She returned to her career in journalism, reporting on Europe’s Eastern Front in World War I and the Woman Suffrage Parade of 1913. She was still working as a journalist at the New York Journal when she died of pneumonia in 1922 at the age of 57.

When it comes to being bold, audacious and unafraid, it would be hard to top Nellie Bly.