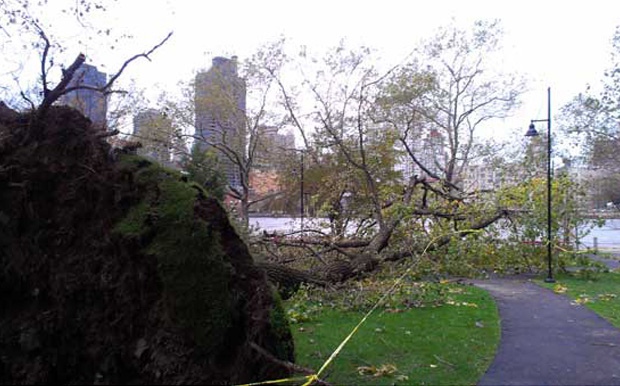 When Disaster Strikes, You Learn to Value Life and Safety Over Possessions

Nothing quite rocks our world like a certifiable natural disaster.

And this year has seen quite a few, including the Derecho, a severe thunderstorm complex that roared through the Mid-Atlantic and Midwest in June, the drought that decimated crops and livestock in the central U.S., the heat wave that killed more than 82 and now, the newest member of the club, Hurricane Sandy, aka Frankenstorm.

“A Region Crippled. Northeast Suffers Flooding and Huge Damage in Storm’s Path; Millions Without Power,” the New York Times headline reads the day after Hurricane Sandy slammed into the East Coast. That’s 8,000,000 people without power and at least 150 people dead overall. Odds are, those numbers will rise.

This was one time when the media did not over-hype the coming event. In fact, Sandy seems to have exceeded expectations as far as destructive power goes. As I write this, she’s still working her way north and west, gradually growing weaker, thank God.

Full disclosure: I left my home on Fire Island on Sunday morning as the storm approached, and I have no idea what shape it’s in. I probably won’t know for days. But I’m lucky enough to be sheltering in a place that’s warm, dry and has electricity.

I left a lot of things back in that house. Furniture, clothes, gadgets, TVs, cookware, artwork… you know, stuff. Some of it I thought I was pretty attached to. But right now, sitting here with my husband and our two rescue cats, there isn’t a single thing that wish I’d gone back for.

It may sound like a cliché – well, let’s face it, clichés exist for a reason – but when disasters of this magnitude strike, you do learn what really matters to you.

Our hearts go out to any and all who suffered during this and the other disasters we’ve seen in 2012. For those of you who’d like to provide a hand to your neighbors, however distant, please visit the American Red Cross website.

Let Concept Cars Give You A Lift Into The Future