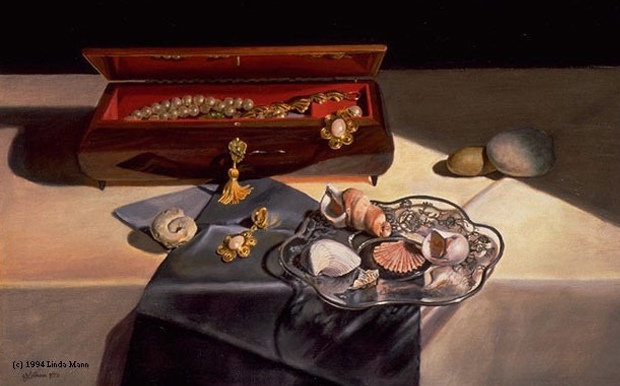 During my time in New York, I’ve had to master the variations of costumes worn at a wide range of public events. For example, the Dolce Gabbana that’s perfect for appearing at an ex-husband’s third wedding in Boca Raton, Florida is completely different than the green silk gazaar Oscar de la Renta cocktail dress for a friend’s mother’s second wedding at The Colony Club.

So clothes – yes – but I’ve never much thought about jewelry. That is, I do love jewelry and buy it, sell it and wear it. Jewelry is adornment and beauty, but I never saw a bracelet or a necklace as a commentary on friendship.

Katie has always been a good friend of mine – not a playing-field-hockey-together-at-the-Ethel Walker-School friend, but a hanging-out-at-the-Limelight-when-we were-single friend. When she got married, I was a bridesmaid at her wedding. The day of her rehearsal dinner, I had a morning photo shoot for some magazine story so my hair and makeup were professionally done. I wore what I thought was an attractive dress, but at the wedding party Katie came up and joked that she was surprised I didn’t make a bigger effort for her big day.

“What do you mean?”
“No jewels.” Katie winked at my Mother. “You’re not even wearing earrings. But I love the dress. Beige looks good on you.”

As the bride floated away from us, my Mother glared at me. “This is not…” She gestured with her hand. “Downtown.” And I felt as if I had somehow shown up at the wedding wearing torn jeans and a vintage Mudd Club T-shirt.

So when Katie threw a 40th birthday party, I was resolved to shine and sparkle as brightly as our friendship. Along with my red sequin dress, I put on a gold necklace and my favorite earrings – a pair of turquoise and diamond chandeliers. I even managed to find a date: a divorced lawyer named Morris who did something murky with airplane leasing. He was always flying to Dubai or Kazakhstan and meeting government officials in hotel rooms.

Katie had recreated the old Copacabana Club for her birthday. Morris and I walked through a silver tinsel portiere up a long dark stairway lined in pink feathers and tinsel. At the foot of the stairs, we were greeted by a 6’5’’ drag queen in a green fluorescent swirl spandex jumpsuit with a silvery gray afro wig, dramatic eyes with inch-long lashes and hot pink glossy lips directing us to check our coats and to pose for the camera straight ahead. “Love your earrings,” the drag queen whispered as I walked past her.

We moved into what I am guessing was the VIP room of the old studio. There were lots of waiters offering drinks and finger food, but the big event of the evening was the surprise appearance Donna Summer. What was even more of a surprise was that she was now the equivalent of two Donna Summers – twice the size of herself in the disco days. But Donna’s voice was still strong and seductive. When she starting singing Love to Love You Baby, I dragged Morris onto the dance floor. He danced like all lawyers – tightly. It looked like he was about to lease a Boeing Airbus to the band. But I was happy – okay, a little wild. And everything was going well until I felt one earring fall off onto the silver dance floor.

Immediately, I fell to my knees and began crawling all over the floor. And Morris didn’t join me. He kept talking about getting help, “We need the staff!” while I glanced at his patent leather shoes. Yes, it was Katie’s birthday, but I had managed to grab all the attention. People thought I was sick or drunk or – perhaps – just unusually humble as I crawled around their legs and found nothing but a green plastic swizzle stick. When Donna Summer began singing another hit (who knew she had so many), I sat down next to my friend Claudia Milstein.

“Look for it when they stop dancing,” Claudia said. But just then out of the ceiling came an explosion of two-inch tinsel strips that look exactly like my earrings.
“Now what?” I asked.
Claudia, as usual, had the correct answer: “Now you are really fucked!”

As the party staggered to an end, I found the coat check girl who introduced me to the event manager who told me he would have all his waiters search the place and to call him in the morning.

During the car ride home, I stared out the window and had visions of my lost earring being swept up in the trash, where it was discovered by the giant drag queen. Morris wanted to know if I had insurance, and I didn’t ask him to come up for drink or anything else. In fact, that party ended our brief relationship (although I do remember him whenever I read about Kazakhstan).

Entering my bedroom, I kicked off my Manolos and unzipped my dress, and the lost earring fell out! I thought about sending a note to Katie apologizing for crawling around the dance floor at her birthday, but it was all too much.

The turquoise and diamond earrings glimmered like real chandeliers in the palm of my hand. It felt as if two good friends had lost each other and were now united again. Then I dropped them into my jewelry box, and closed the lid with a sharp snap.

Tom Ford and I