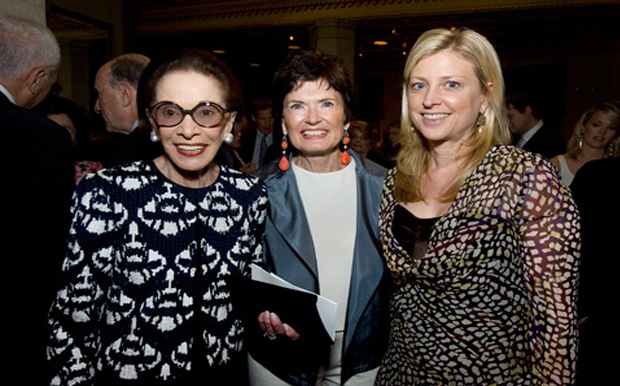 Her nails and lipstick were bright red, her designer outfits and heavy framed glasses black. People often described her as having a martini glass in one hand and a cigarette in the other.

Her fashion sense was impeccable. In addition to Ralph Rucci, she was an early supporter of American designers like James Galanos, Geoffrey Beane and Bill Blass. Not surprisingly, she was inducted into the International Best Dressed Hall of Fame in 1988.

Her marriage to Abe Ribicoff, former Senator and Governor of Connecticut, was a love story for the ages. She followed his career for years after they met in 1962, but their romantic relationship didn’t begin until after the death of Mr. Ribicoff’s first wife. In order to keep their relationship out of the press, she would leave messages for him using the code name “Dr. Casey” from the television series “Ben Casey, M.D.” The name stuck. And that’s how the woman born Lois Ruth Mell became Casey.

Her philanthropic activities included 20 years on the board of the Kennedy Center, and being the first woman elected to the board of trustees of the Mount Sinai Medical Center in Miami Beach. She also cofounded the AIDS Care Center at New York-Presbyterian Hospital with Bill Blass, Judy Peabody and Glenn Bernbaum.

But when she died in August 2011, it was her tremendous capacity for friendship that people remembered. Nancy Reagan told how they had bonded tightly over their shared burdens of caring for husbands suffering from Alzheimer’s, despite the fact that those same husbands had stood on opposite ends of the political spectrum. Barbara Walters described how Casey had taken care of both Bill Blass and Dominick Dunne when they were ill.

In the end, maybe it was her friend Tom Brokaw who best described her. “She was just a great dame,” he said. “She knew everything that was going on in New York … and she had real insights into Manhattan’s politics, economics and culture.”

How to Work the Sandals